I’ve written an app for Windows Phone 8.1 called Agenda View. It puts back a feature that was built into earlier versions of Windows Phone, but which went missing in the 8.1 update.

When I first installed a public preview of Windows Phone 8.1, I noticed some striking changes to the built-in Calendar app. For the most part, it’s an improvement—in addition to the old day and month views, we get two new views: year, and, most usefully, week. However, we lost something: the old agenda view.

The agenda view, present up to Windows Phone 8.0, but not beyond that, presents all your upcoming appointments in a simple list: 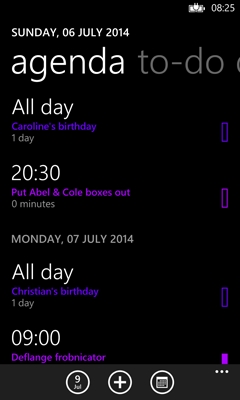 I much prefer this to the day view, because the day view makes it too easy to miss things. It can only show 8 hours at once, or less if you have a few all-day appointments. (Those sit at the top, reducing the space available for the rest of the day.) So if you have appointments early in the morning and also some in the evening, you can’t see them all at once. It’s really easy to look at the day view and think you’ve got nothing on for the day: 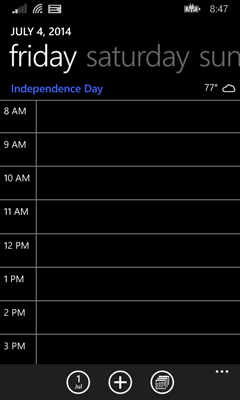 In fact I’ve got a few appointments for that day in the morning, late afternoon, and evening. There’s no way to see that at a glance—I have to scroll up and down to look for early or late appointments.

The agenda view doesn’t have this problem, because it shows all your appointments in order with no gaps—it makes no attempt to space items out according to the time between them. So on days such as the one shown above where I’ve got morning and evening appointments and nothing in the middle, I can see the whole day at a glance: 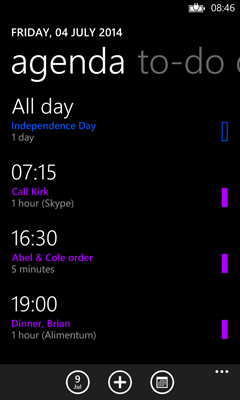 Windows Phone 8.1’s new week view goes some way to making up for the loss of the old agenda view: it shows as many appointments for each day as it can fit, and like the old agenda view, it shows them in a simple list, rather than spacing them according to time of day like the day view. The problem is that by fitting an entire week onto the screen, it doesn’t take many appointments before they don’t fit. You can tap on a day to expand it, but this only makes a little more space: 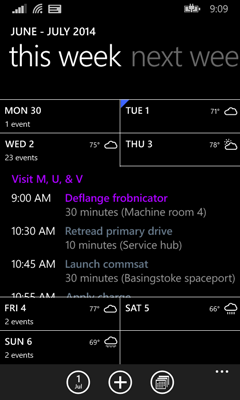 You can scroll through the items of course, but because the list is so small, this is more fiddly than with the old agenda view, and in any case, it’s a much less convenient way to see everything you’ve got coming up for the day than a straightforward list filling the screen.

Putting the Agenda View Back

Because the agenda view was my preferred way to look at my calendar, I decided to write an app that works in the same way. It’s not identical—for one thing, it only supports this one mode. (You can use the built-in calendar app if you want the other views.) This removes the need for navigation chrome at the top, making the entire screen available for your appointments: 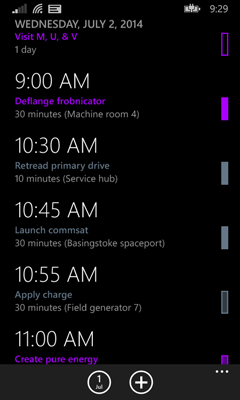 This means you can see even more of your appointments at a glance.

You can find the app in the Windows Phone store at http://www.windowsphone.com/en-us/store/app/agenda-view/3973880d-95f6-4f36-b8d2-ced2c49eb3f4 and there’s also a simple site for the app at http://windows-phone-agenda.com/. (Thanks to Felix at http://blackspike.com/ for the design work on that site.)

Some aspects of this apparently simple app were surprisingly technically challenging. (E.g., getting groups within groups to work, when the ListView supports only a single level of grouping; updating a collection of view models from a source in which items may randomly appear or disappear without disrupting the scroll position, or scroll animations in progress.) So over the next week or two, I’ll be posting blog entries on various technical details of the app.